Wow, six months before I had done my first official 5k, and now I had just signed up for a half marathon! I had to go all out for it so I picked the Las Vegas Rock and Roll Half Marathon on 12/02/12. Besides being the most expensive race in the country, it is on the Las Vegas strip at night. I don’t even care how much money it cost me as long as I don’t have to wake up early for a race!

As part of my training, I subscribed to the magazine Women’s Running and started to follow a training plan from one of their issues. The half-marathon plan seemed too easy, with long runs of only 7 or 8 miles, so I decided to follow their full marathon plan up to the point where it got to 13 miles. I was training 3 or 4 times a week, increasing my mileage carefully, and doing yoga twice a week for cross-training. Everything was going really well and a run didn’t even seem like a workout anymore unless it was longer than 6 miles. Most of the times I would run in Reno, either at Iddlewild with M.H. or near my house, but sometimes I would go to Carson and jog with J.W. who was also signed up for the Las Vegas Half. After I reached 13 miles a couple of times, I was very confident and started to slow down.

Two days before the race, the days were getting too short and I went to a gym to run on a treadmill after the sun went down, something I hadn’t done in over a year. After mile 3, my right hip began to hurt so I stopped. I thought, “Hmm, a quick 3 mile jog can’t do any damage”. The next day, I could barely move my leg. My hip flexor was in excruciating pain and I had to lift my right leg with my arms to get up or get in or out of the car. I drove to Las Vegas like this, but I was in denial, pretending nothing was wrong.

The day of the race my leg was a little better, but I still had limited movement. I had gotten all the way there and nothing would stop me now. I ate tons of pizza and off I went. The race course begins at the Luxor and goes thru the strip, then to Freemont strip until it reaches a ghetto part of Vegas and turns around to finish near The Mirage. It’s a fun course with bands along the way and tons of people cheering for you. Over 20,000 people run this half-marathon, but I thought the race was very organized and everything just flowed. I ended up running my first half-marathon in 2h30m21s (11:29 min/mile). Crossing the finishing line was exhilarating and my runner’s high lasted all night long. I couldn’t stop eating, talking, or smiling.

My leg got worse again the next day, but by that time I didn’t care anymore. I went to the doctor’s and even to the chiropractor for months. I wouldn’t be able to run again for another 8 weeks. No problem at all: I had done something I never thought possible, and I didn’t mind the forced rest. Plus, my injury gave me an excuse to go to yoga every single day.

I totally understand why half-marathons are the fastest growing races in the US. It is very challenging, but not impossible, time-consuming yet fun. A marathon is too long and difficult to train for and a 10k most of the time doesn’t even require training or feel like a work-out. I can’t wait to do a half-marathon again, but it’s so difficult to find a race at night…

With J.W. before the race 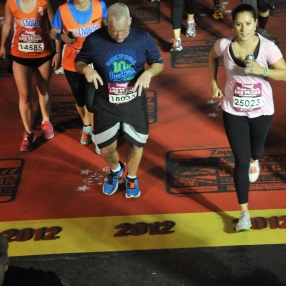