Let me start by telling you how I got to run my first 5k. After I finished my Couch to 5k challenge, I continued to run 2-3 miles on a treadmill. The first time I reached a full 5k (3.1 miles) was on May 19th 2011 (yes, I remember the exact date) when I had to sub for the Physical Education teacher at my school. I took the students to the gym and to pass my time I started jogging on the treadmill. It took me almost 40 minutes and it was very hard, but so exciting! The weather was getting better and I started to run outside.  I even inspired a couple of friends to jog with me as well. Right around my birthday though, on May 27th, I had my first running injury: a stress fracture on my 5th metatarsal (pinky toe bone). I wasn’t supposed to run again for 3 weeks… Although it was disappointing, I was kind of proud of my first running battle wound. That summer I went to Peru and I was able to fit in some jogging time while sightseeing and studying. Wow, fitness was slowly becoming a priority!

In the October of 2011 I signed up for my first 5k: a Susan G. Komen race to benefit breast cancer research. It was the same race I walked a year before and where I had heard about the Couch to 5k program for the first time. As you might know, I hate waking up early; so on the day of the race, I arrived at the spot 20 minutes late, just as the first runners were crossing the finishing line. I did it anyway, late and all! It took me 31 minutes according to my watch, but the announcer didn’t know I had started later than everybody else, so I heard him saying “… and one of our last 5k runners just crossed the finished line.” Since my official time was actually 54 minutes, I don’t really consider this my first official 5k race, but just a training one. I’ll tell you about my real “official” first 5k (you know, the one I actually made it on time) in another post. 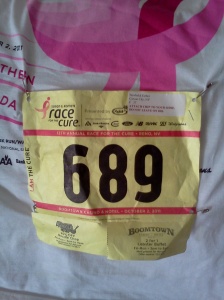 2 thoughts on “My first race ever”